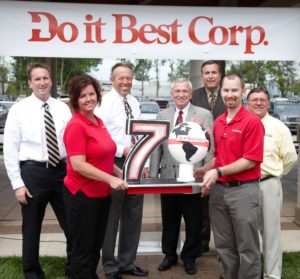 Fort Wayne Mayor Tom Henry, New Haven Chamber of Commerce President and CEO Charlie Hatten and City of New Haven 3rd District City Councilman Craig Dellinger joined more than 400 current and former Do it Best Corp. employees in celebrating the co-op for its performance as one of the world’s most successful hardware co-op distributors and one of Indiana’s largest privately held companies. Henry and Dellinger read proclamations declaring “Do it Best Corp. 70th Anniversary Day” in each of their cities to commemorate the date in June 1945 when Arnold Gerberding incorporated Hardware Wholesalers Inc. in Fort Wayne with 96 original members. The company’s name changed to Do it Best Corp. in 1998 after a successful merger with Our Own Hardware, a regional co-op serving the Midwest.

“It’s incredible to think about how much has changed since our founding. From those humble beginnings as a regional hardware co-op, we’ve grown to serving more than 3,800 member-owned locations throughout the United States and in 54 other countries,” said Do it Best Corp. President and CEO Bob Taylor. “At the same time, a big part of our growth as a co-op can be attributed to what hasn’t changed – our unending commitment to our #1 goal of helping our members grow and achieve their dreams.”

As the only U.S.-based, member-owned comprehensive and fully integrated hardware, lumber and building materials cooperative in the home improvement industry, Do it Best Corp. has benefitted from incredible continuity of leadership, with Taylor serving as only the fourth president and CEO in the co-op’s 70 years. In addition to the 400-plus employees who work at its Fort Wayne world headquarters, the co-op employs an additional 1,100 employees across its eight regional distribution centers and five regional lumber offices. Sales for its current fiscal year are expected to approach $3 billion.

“For us, no other co-op offers the combination of flexibility, affordability, scalability and customization in its programs and services, which is so important to us as entrepreneurs and member-owners,” added John Connolly, who with his family operates four Connolly’s Do it Best Hardware locations in Fort Wayne. “In addition, we believe their unending commitment to service – backed by hard work, determination and innovation – makes us stronger and more successful as retailers, just like our fellow members around the world.”

Source: Do it Best Corp.