In markets like the California coastline regions of San Francisco and San Diego, where new home builds are priced well into the millions, it pays to be an expert in your product category. For Associated Building Supply, Inc., that specialty is windows and doors. And not just any doors and windows. At ABSi, they provide windows and doors to the builders of some of the most expensive homes in the country.

Led by longtime friends Scott Thurber and Chris Cole, Associated Building Supply, Inc. has a story that differs from many building materials dealers still climbing out of the recession. For ABSi, the focus on high-end windows and door products actually kept the business growing through the recession.

“The recession was actually OK for us,” said Thurber, company vice president. “Not only did we survive, but we grew during that time. It wasn’t easy, or nearly as lucrative as today, but we survived.”

The fact of the matter is, while the economy struggled, those with more simply struggled less. “The affluent buyer will have resources even in bad times,” Thurber said. As the upper market of the building and remodeling industry continued through the recession, so did ABSi, as the business focused on not just builders and their homeowners, but architects as well. Today the company bills itself as the “premier retailer of windows and doors for the discriminating custom homebuilder, homeowner, and architect.”

While Thurber is the vice president of the company, Chris Cole is the founder and president. The two have known each other since they were both regional sales managers for a window company in the 1980s. Cole opened ABSi’s first location in 1993 in Oxnard, California. Since then, the company has grown to 13 locations, primarily high-end product showrooms specifically displaying unique window and door products. ABSi locations include a main office based at the Oxnard location and a satellite corporate office in Auburn, California. The remaining 11 locations are showrooms/sale offices in Burlingame, Berkeley, Sonoma, Dublin, Los Gatos, Pacific Grove, Oxnard, Calabasas, Costa Mesa, Torrance, and San Diego. 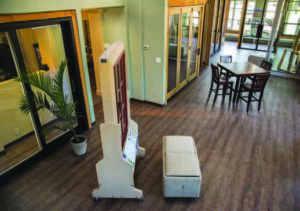 Thurber joined up with Cole in 2006 after continuing his corporate career as a regional manager for a number of manufacturers that had kept him away from home more than he’d have liked. Thurber recalls a specific moment when he overheard his son, then six years old, tell a friend that “my dad works at the airport.” He knew then, Thurber said, that it was time to settle into a job that kept him closer to home.

The two have developed what they call a unique model for running the business. “(Chris) is stationed at the corporate office, overseeing the day to day operations,” Thurber said. “Oxnard corporate is where the operations side of the business is managed. I’m out in the field a lot mixing it up with our sales force as well as directing marketing. There is no line drawn in the sand so our roles at times fluctuate depending on the needs of the business.”