Last year, one of the major policy questions raised by candidate Trump was the issue of immigration, especially undocumented immigrants from South America, and the Islamic terrorists. Recently, 60 Minutes aired a segment focused on immigrants from India that displaced American workers in high tech jobs. While frustration about lost jobs has been directed at immigration and imports, one of the primary causes has been automation, for instance robots in the auto industry and software in the service sector. The wood products and timber industries have not been immune from this trend as evidenced by the ramping up of automation in wood products mills and the introduction of a new technique for logging, called tethered logging, which requires one logger instead of five for moderately steep slopes.

The Trump Administration is trying to keep a campaign promise to reduce illegal immigration by beefing up border patrols and enforcing the existing rules that apply to undocumented immigrants. Unfortunately there is not data yet on how many have been deported, but as will be discussed later, this deportation could hit some regions of the U.S. particularly hard.

An aggressive deportation policy, plus the efforts of two Republican Senators (Tom Cotton and David Perdue) aimed at reducing legal immigration by 50% could have some serious economic consequences.

The purpose of this spotlight is to focus on some of the potential implications of these immigration changes on the overall economy and for the wood products industry.

Recently, we along with other economic forecasters have been forced to lower our forecast of potential economic trend growth (as measured by Gross Domestic Product— GDP) for the U.S. economy significantly. Trend economic growth is primarily driven by two factors: growth in productivity and in the size of the labor force. Historically, trend GDP growth was above 3%, since productivity growth used to be near 1.5% per year and the labor force was growing over 1.5% per year.

There are two reasons behind the downward revision to trend growth. First, there has been a significant drop in productivity growth. No one is quite sure why productivity has slowed, so most people assume it will remain near 1%.

Just as troublesome has been the dramatic slowdown in the growth of the labor force. A recent forecast from the Bureau of Labor Statistics (BLS) is for the labor force growth to be only 0.5% per year over the next decade. There are several reasons for this: the aging of the work force; the decline in participation rate, especially for working age males; and finally slowdown in population growth. As the BLS pointed out in their discussion of the forecast, the hardest component of population growth to forecast is the immigration number.

More important to the labor force growth issue is the pattern of aging for the population. The age groups that are important to labor force growth are between the ages of 18 and 64. The age distribution for immigrants fills an important potential hole for that age group. There are two bulges in the domestic population. One wave is the over 65 age group, or the Baby Boomers. The other group is ages 35-44—the baby boom echo. There is going to be a big drop in the population under the age of 35 over the next 10 years for the current domestic population.

So what are some key implications if immigration were cut by 50%? First, it means that labor force growth would be 0.2% instead of 0.5%. Trend economic growth would be reduced to near 1% per year, plus it would become difficult to find young entry workers. With labor markets already tight since unemployment is below 5%, it would mean wage rates would accelerate even more over the next five years. The difficulty builders are having in finding workers would even be more severe. As referenced in other FEA discussions, labor is one of the supply constraints holding back housing starts. 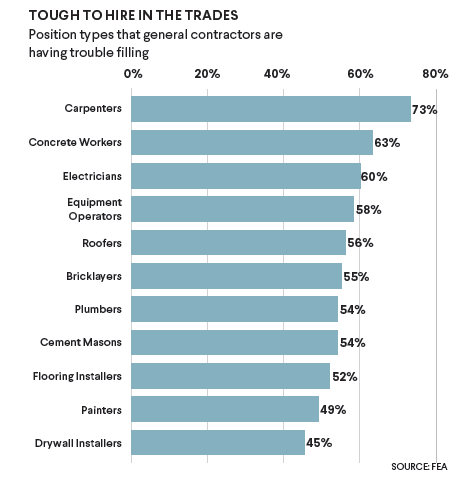 A recent Pew Research report estimates there are about 11 million undocumented (illegal) immigrants in the U.S. The Pew report estimated that about 8 million are working or are looking for work, which means about 5% of the current work force, even though they are not included in the BLS estimates of the labor force. Some states and urban areas are particularly vulnerable to the deportation of illegal immigrants. About 60% of these immigrants reside in six states (CA, FL, TX, NY, NJ and IL)). Some urban areas would be particularly hard hit. About 9% of the Houston labor force is undocumented immigrants. Although N.Y. City has the highest number with over one million, they constitute less than 6% of the work force.

What are the key implications if the Trump Administration
continues to pursue the aggressive deportation effort? First, the growth in the U.S. population and actual work force will contract significantly. Some regions would be hit hard. Certain segments of the economy, such as construction and agriculture would not be able to find workers or will have to pay significantly higher wages to attract workers. The problem could be seen very quickly as illegal immigrants go underground to avoid detection.

Population Growth, Household Formations and
Trend Housing Starts
The Harvard Joint Center for Housing Studies (JCHS) recently revised its forecast of household formations. A key assumption was the legal immigration level of 1.2 to 1.3 million per year over the next decade. Since this was higher than the level projected in the 2012 forecast, the JCHS revised up expected household formations from 1.2 to 1.4 million per year. The JCHS stressed that immigration levels are one of the biggest uncertainties in their household formation estimates. Changes in the tendency to form households (and variations in the population forecasts are important, but are not expected to change dramatically.

Just to help illustrate the overall implications for housing starts, the following what if scenarios were constructed: SCENARIO #1: What if the Republican legislation passes and legal immigration is reduced by 50%? This would cut annual immigration by 600,000 to 650,000 per year. Assuming new immigrants must share living quarters (assume 2-3 adults/unit), then the cut in immigration would reduce household formations by roughly 0.2-0.3 million per year. This would reduce trend housing demand by 15-20%/year.

SCENARIO #2: What if legal immigration is cut by 50%, and the Trump Administration deports 25% (could be lower or higher) of the current undocumented immigrants over the next 10 years? This would reduce the overall adult population by another 3 million people by 2025. The combined actions could lower the underlying trend demand for housing starts by 22-27% over the next 10 years.

Bottom Line
The proposed immigration limits and deportations being considered by the U.S. government will lower economic growth potential and trend housing starts. Lower trend growth will have major implications for policy actions as well. For instance, the Federal Reserve might be forced to become more aggressive and push interest rates up faster if growth stays above 2% and wage rates push above 3%/year. The deportation activities could make it more difficult for builders to find workers, especially in some regions.