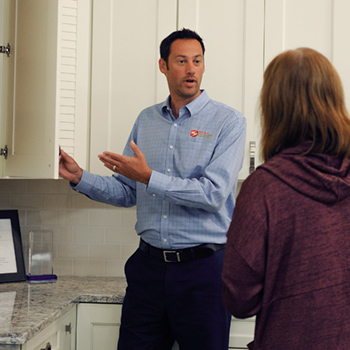 If your leadership reflects youth and diversity, your employee group will as well. We’ve adopted technology in a way that has driven our ability to attract and maintain our millennial talent.

Everyone knows the adage, “you can’t manage what you can’t measure.” It’s what a CEO says when his general manager needs a talking to. It’s what the general manager says when he is training in a new inside sales rep. Much of the time the saying applies to processes and procedures that are required to keep everyone in line. But at the heart of the saying is a four-letter word: Data.

At Zeeland Lumber & Supply in Zeeland, Mich., President and CEO Mike Dykstra has embraced data and has used it to grow his company from a one-location lumberyard with 100 employees prior to the Great Recession to its current six locations, in three different business units, employing 400.

“We measure what matters to the customer,” Dykstra says. “We’ve all read the business books and there’s always that one key takeaway: KPIs (Key Performance Indicators). We measure what’s important to the business.”

As the company grew beyond one location, key performance indicators had became increasingly important. As Dykstra says, “at one location, I could walk around and visually get an eye for what was going on. With multiple locations, it was different.”

For Zeeland, the heavy focus on data has uncovered the good and not-so-good, Dykstra says. To evaluate each end of the data spectrum, top company management gathers every Monday morning for a KPI meeting to take a real-time look at the business based on the previous week’s data.

He adds that the process of evaluating the company’s metrics holds members of the management team accountable to each other and accountable to Zeeland’s employees and customers.

“We’ve developed this process to make ourselves better. It makes us aligned as a team and accountable. It’s a very visual process,” Dykstra says of the analytics dashboard the management team has developed. “It’s green, yellow, or red. If it’s red, we had better be talking about it. If it’s green, then it’s good.”

Dykstra has also introduced a Warehouse Management System (WMS) to the company. It’s a technology that manages inventory, load pulling, material movements, cycle counts, and receiving. Every product the company moves is logged with a scanner. Loads are pulled from scanners. Cycle counts are real-time and accurate.

“Loads are going out more accurately. Productivity is better. The WMS is just another area where we have adapted to technology.”

The focus on technology and the data it generates doesn’t just stop as a product leaves any of Zeeland’s locations. The company also utilizes GPS throughout its truck fleet, and drivers are equipped to take photos of delivered loads.

The company’s truss and wall panel shops also rely heavily on technology, with a productivity and production management system displayed on large screens above the truss lines.

“We have strong relationships with our tech partners,” Dykstra says. “We fully utilize the technology available to us.”

At a company the size of Zeeland, that technology needs to operate its full line lumberyards in Zeeland and Waterford in Michigan, and Misawaka, Ind., as well as it’s showroom in Kalamazoo, Mich. The company also manufactures trusses and wall panels in Grand Rapids, Mich. and Elkhart, Ind., and trusses in Commerce, Mich.