A good majority of that comes from single family custom builders, which will make up 40% of the revenue. Single family production makes up 25%, and multi-family/commercial will contribute another 20%. Remodeler, agricultural, and consumer round out the rest at about 5% each. 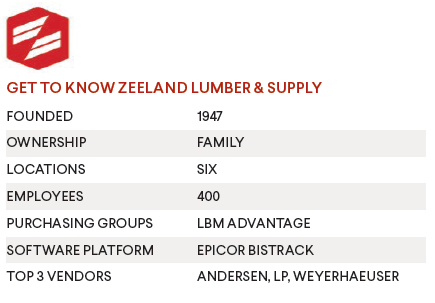 The company’s focus on technology has also allowed for Zeeland Lumber to maintain a high percentage of millennials on staff. Dykstra—himself a 47-year-old President and CEO—believes that the makeup of the leadership team and its focus on technology is reflected throughout the company. Along with Dykstra, the executive team at Zeeland includes two Vice Presidents in their 30s.

“I’m toward the older end of our management team when I look around the room,” Dykstra says. “If your leadership reflects youth and diversity, your employee group will as well. We’ve adopted technology in a way that has driven our ability to attract and maintain our millennial talent.” 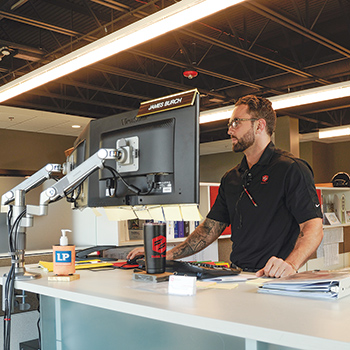 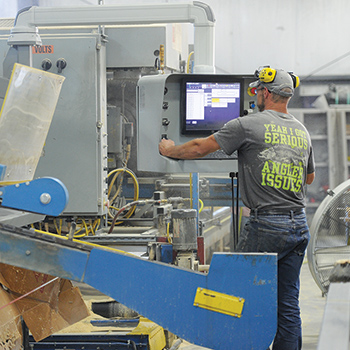 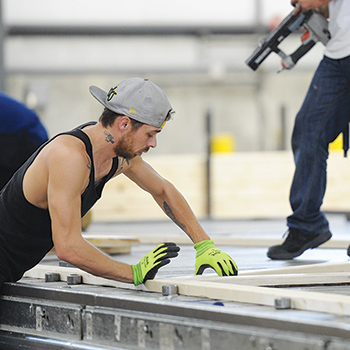 While the technology is helpful in drawing in young talent, there’s more to a position at Zeeland than just having the latest tools to perform the job. Zeeland has also taken steps to make its corporate offices as fresh and up-to-date as possible. After a tornado hit the Grand Rapids, Mich. facility in 2014, Zeeland rebuilt with what Dykstra describes as “an eye for making an improved employee experience.” His philosophy, he says, was to focus on the employee experience and the customer experience. In doing so, the financial experience would follow.

The company rebuilt its production space, 40,000 square feet of which was lost in the tornado. They took the opportunity to rebuild an office space with multiple, flexible areas, and gathering spaces with kitchenettes and a coffee shop area.

“Some people have told us it looks more like Google than a lumberyard. It’s a great attraction tool for employees. We have learned that workspace matters.”

Since then, management at Zeeland has gone back to its other locations and have incorporated what they’ve learned.

“We have sit-to-stand workstations in every one of our offices,” Dykstra says. “That has had a big impact on people, how they feel about work and how the company cares about them. It’s a healthier way to work. Small things like this have made a big difference.”

Along with a knack for hiring and retaining millennials, Dykstra has also discovered another way to beat the industry’s labor crunch. For the past five years, he has been hiring employees who the company calls “returning citizens.” These are employees who have previously been incarcerated.

Coming out of the Great Recession, Zeeland found itself in need of employees, much like many companies in the trades. Front line employees in wall panel and truss manufacturing are difficult to come by, Dykstra says.

The company’s program with returning citizens has been so successful that Zeeland has become known as an organization that helps reduce recidivism. Dykstra says statistics show that an individual is 80% less likely to reoffend if they have a job and a place to live.

“We can provide that job,” he says. “We’re currently working on improving the lives of 40 employees in this program. There’s a certain amount of risk, but turnover and productivity has been no different than the rest of our employees. We didn’t go into it lightly, but we found that the rewards are great. The loyalty and gratitude that people have for their job is very rewarding.”

Dykstra also shares with new-hires the importance of the industry within the community. Jobs at lumberyards have a higher purpose, he says. “This industry is dynamic. It’s where change happens. They’re building and transforming the places where families and business live, grow and thrive. Plus, there’s growth. It’s very entrepreneurial.”

It’s that aspect of the industry that originally drew Dykstra to the business that was started by his wife’s great grandfather in 1947. The company began as a manufacturer of pallets and shipping crates for the post-World War II effort in Europe. When the pallet and crate making was completed, the piles of lumber that remained were turned into a retail lumber operation.

Dykstra’s wife’s grandfather, followed by his father in-law, ran the operation and steadily grew in West Michigan. In the 1990s to early 2000s, the company expanded its product mix so as not to be as dependent on framing products. They began selling windows, doors, roofing, siding, and interior millwork.

Dykstra came into the company in 1995, with the idea that he would work a variety of roles while his father in-law transitioned into retirement. Dykstra worked in customer service, product management, purchasing, sales management, and operations. Soon he was offered a leadership opportunity. In 2010, he was named company President and two years later, in 2012, he became CEO.

The transition allowed the company to assess the area’s competitive landscape, to understand the company’s capabilities and set course for where Zeeland Lumber wanted to be as the economy recovered from the recession.

In 2008 the company merged with Hamilton Lumber and Truss in Grand Rapids. Another business venture is Zeeland Contractor Services, a labor solution in the market that offers installed sales for multi-family packages. The group installs framing, windows and other projects.

Coming out of the recession, Zeeland also redesigned production in its truss and wall panel plants. They changed the market from two-step to one-step, and customers now have direct access to design staff.

“We show customers that we’re in it together,” Dykstra says. “The old way was to get the floors from someone and the roof from someone else. Now we provide all the value. It’s an integrated framing solution to the user.”

The wall panel business has increased tremendously with multifamily customers. Because Zeeland’s market is seeing a lot of multifamily growth, the company has gone all-in. Now,

even with labor constraints for builders, more than 90% of the company’s wall panel business is multifamily, such as apartments, campus housing and assisted living.

“There was a bit of a learning curve. The difference is that multifamily is much more contractual. There are large contracts, and payment terms extend a little longer than the single family business. But it’s a guaranteed package— one contract, one price for the entire project. Material estimates are critical, and we’ve got a team dedicated to that,” Dykstra says.

Zeeland’s growth has been based on a solid mission and a core group of values, Dykstra says. Perhaps one of the most important of those values is career-long learning. It’s a value that resonated strongly enough for him to go back to school for an MBA degree while he was transitioning into his CEO role. His focus on continued learning has strengthened the management team and the rest of the company.

“We’re really into learning and developing ourselves as people. It plays into our growth. If we want to grow…the organization will only grow as the top leadership allows it to.”

The LBM industry has become a lot more complex over the past decade, Dykstra says, but he adds “it has been a great journey.” As the company sees continued success, there is the potential for more acquisition on the horizon.

“Today’s hiring market has made it difficult, but we’ve expanded a few times successfully. We’ve also acquired a company and now we have that capability.”

Though the company is in acquisition mode, there are geographic and complementary service aspects that need to align for growth to occur.

Dykstra says he feels good about the future of Zeeland Lumber & Supply, and much of that feeling can be traced back to the company’s slogan: “Build. Trust.”

“Build. Trust.” is based on Zeeland Lumber Supply’s “desire to be excellent at our intended product or service,” Dykstra says. It’s the company’s focused approach to business that continues to see success because of its focus on data.