Click here to continue to the latest LBM news.
This advertisement will close in seconds...
LBM Journal Strategies for Lumber & Building Material Pros
Home In Depth IN DEPTH: Engineered Lumber 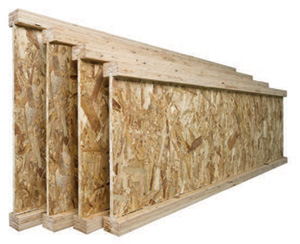 Among the areas where wood is gaining particular attention is the multifamily market. Along with use in buildings of three stories or less, there is growth in wood-framed four- and five-story structures in areas where they are permitted. And the timing couldn’t be better, as the multifamily sector is still posting strong numbers even as it has started to plateau.

“Everybody’s getting a lot more comfortable with wood in those larger structures,” says Ben Midgette, director of business growth and strategy for engineered wood products at LP.

Roseburg has seen some of its most significant growth recently in its deepdepth I-joist series. “These products are intended for light commercial, multifamily, and large custom home construction,” McCollum says. “Additional growth has come from our our thick section (billet beam) LVL, which competes with heavy timber and glulam. The demand for large open spaces and heavier load capacity drives this segment of our production.”

Rosboro has seen increased interest in its X-Beam glulam for multifamily projects, with the material capable of meeting long span requirements and an architectural appearance that can be left exposed.

Using EWP for multifamily applications is particularly helpful for infill projects, says McCollum. “EWP is delivered to those jobsites in ready-touse pieces and packages. For buildings in infill areas, you don’t have staging yards and room to prepare material. You want to take it off of a truck and install it. That is one place where [EWP] really shines.”

EWP also will play a role in increasing efforts to reduce noise in multifamily structures. According to Midgette, the American Wood Council, in cooperation with the whole industry, is working on a calculation method for sound assemblies in multifamily construction that makes it more accessible and easier to implement. “It will be a welcome thing for architects and engineers as they work more and more with wood,” he says.

Beyond mid-rise, tall wood-framed buildings are getting a lot of buzz and press thanks to cross-laminated timber (CLT) and mass timber products. It’s an area that’s still in its infancy and is only allowed in some jurisdictions. But for dealers, it’s worth paying attention to as the codes and availability evolve. The dealers’ role is still uncertain, as of yet, but its likely to include providing traditional engineered wood materials and accessories as part of larger CLT buildings.

In addition, “There’s a resurgence in certain parts of the country for more exposed applications,” says David Smith, glulam sales manager for Rosboro. “Before, all of the glulam was behind drywall; now we’re seeing a resurgence of the open, exposed-to-view construction.”

Glulam as a whole has been attracting more attention, particularly as the industry works to educate dealers and builders on some of the misconceptions, most notably that many applications users thought had to use custom glulam actually can be achieved with stock beam products. Stock glulam beams are available in commonly used dimensions and in widths that match standard 2×4 and 2×6 construction.

Gary Schweizer, PE, director of engineering at Weyerhaeuser, says one of the biggest current trends is a more holistic approach to design. “Rather than looking at a component, they’re looking at a whole floor system,” he says. For example, Weyerhaeuser looks at its TJI joists in conjunction with OSB floor decking, floor coverings, and the ceiling— how is the ceiling connected, the partition walls, the home’s layout? The company’s TJ Pro rating system is a tool for evaluating floor performance. The dealer can model the home based on consumer preferences and budget and determine the right product and installation mix to meet those expectations. 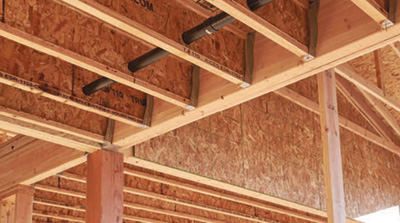 Elsewhere, regulations around fire continue to play a role in product development. The 2012 and 2015 versions of the International Residential Code include requirements for fire performance in floor systems, in particular targeting exposed I-joists in floor systems over unfinished basements.

To meet the requirements while still allowing for use of I-joists, Boise and other manufacturers have worked with APA to develop a range of solutions, including using gypsum board in prescribed locations on the floor assembly or installing mineral wool batts. Several manufacturers also have developed ready-to-install products that specifically meet those needs. Weyerhaeuser’s TJI joists with Flak Jacket protection feature a factory-applied coating that enhances the joists’ fire resistance. The manufacturer also now offers Flak Jacket FRT protected rimboard for Type III construction.

LP launched its FlameBlock I-joist in January, featuring a Pyrotite coating that slows the effects of heat and flames. onCenter Advanced Framing Lumber from BlueLinx meets the requirements when specified in depths of 9-1/4 inch or greater, without additional materials, labor, or coatings. The code affects a relatively small percentage of houses, but “it gets a lot of press because it is one of the first things that’s hit us for awhile,” notes Midgette. “It belongs somewhere on the radar. It’s not going to cripple our industry nor double it.”