SEATTLE — U.S. luxury home sales increased 41.5% year over year in the third quarter, according to a new report from Redfin, the technology-powered real estate brokerage. That’s the largest jump since at least 2013, when Redfin began recording this data. Meanwhile, sales of medium-priced homes climbed just 3%, and sales of affordable homes declined 4.2%, underscoring the coronavirus pandemic’s disparate impact on Americans with lower levels of wealth.

“The luxury housing market normally takes a hit during recessions as wealthy Americans tighten their purse strings, but this isn’t a normal recession,” said Redfin chief economist Daryl Fairweather. “Remote work, record-low mortgage rates and strong stock prices during the pandemic are allowing America’s wealthy families to gobble up expensive houses with home offices and big backyards in the suburbs. Meanwhile, scores of lower- and middle-class Americans have lost their jobs or are still renting in the city because they’re essential workers and have to commute into work, so they’re unable to reap the benefits of homeownership.” 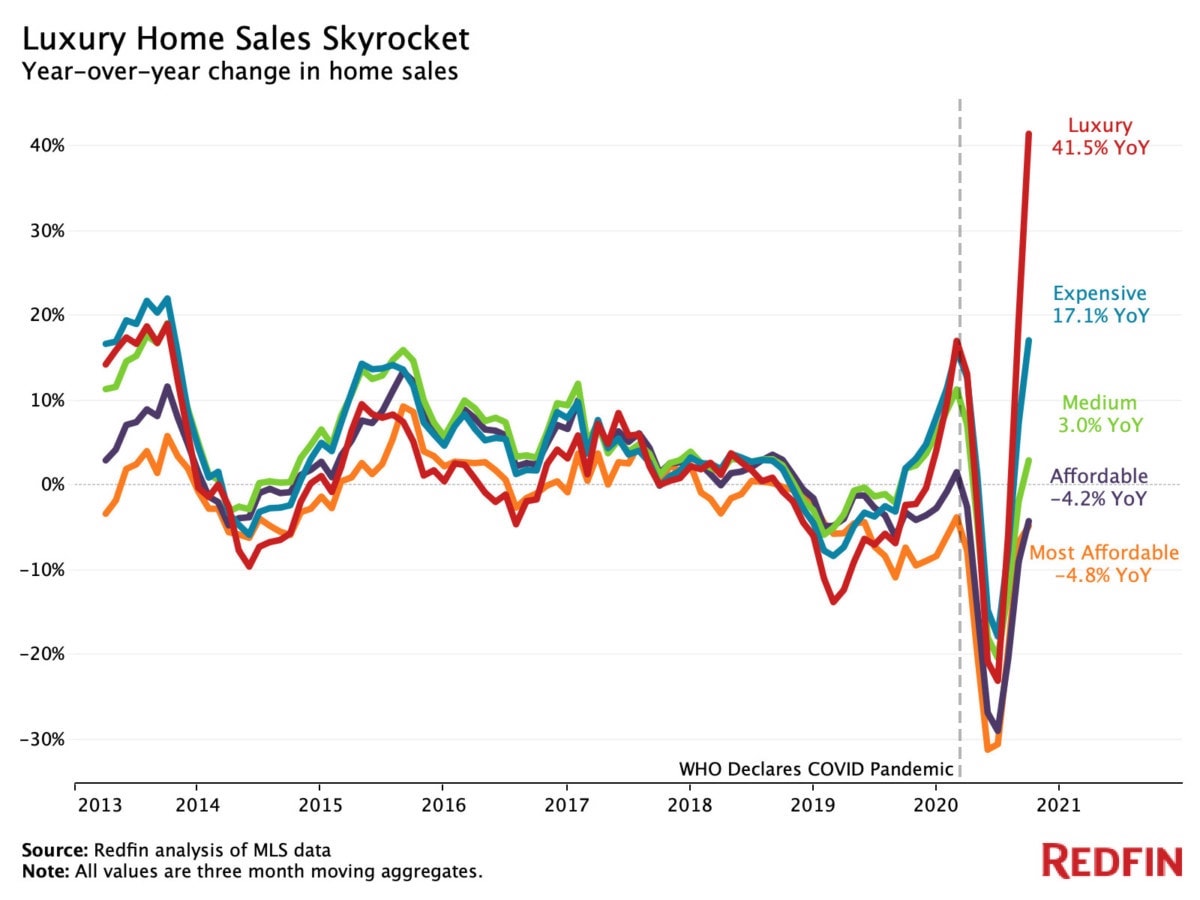 A handful of West Coast metro areas fueled the surge in luxury home sales during the third quarter. In Sacramento, luxury sales soared 86.1% from a year earlier, more than any other major metro. Rounding out the top three were two other California metros—Riverside, CA and Oakland, CA, up 62.8% and 60.9%, respectively. Portland, OR (+60.6%) and West Palm Beach, FL (+59.7%) also saw sizable gains.

“It’s well known in the real estate world that luxury properties typically take longer to sell, but this may be starting to change,” said Redfin Sacramento agent Kelly Crocker. “Sacramento has always been a popular landing place for transplants from crowded cities, but now with the pandemic and record-low mortgage rates, it’s becoming an even bigger hotspot for people who have the means to move. We’re seeing a lot of tech workers sell their expensive Silicon Valley homes and come out here in search of more space and more bang for their buck. A number of my buyers have been eyeing the Sacramento suburbs for a while, but are just now pulling the trigger because rates are low and they no longer need to commute into work.”

“Philadelphia is seeing more luxury sellers than buyers right now because luxury homeowners are fleeing the city during the pandemic,” said Redfin Philadelphia agent Blakely Minton. “Why spend $1 million on a high-end home in the city when you can get a larger house with land in the Philadelphia suburbs for a more affordable price?”

Luxury home prices increased 6.5% year over year in the third quarter, while prices in the expensive tier rose 7.2%—both outpacing the 2.9% growth in prices of the country’s most affordable homes.

“Prices of the most affordable homes are experiencing relatively slow growth because the families who typically buy these homes have been hit especially hard by the pandemic,” Fairweather said. “So long as the coronavirus keeps people out of work and the government doesn’t provide more stimulus, the owners of America’s most affordable homes will continue to see relatively low property value growth because the folks who would normally make offers on their homes will consider it more financially prudent to continue renting instead.”

The supply of luxury homes is growing

The number of luxury homes for sale increased 8.4% year over year in the third quarter, while the supply of homes in all other price tiers declined.

“Luxury listings are skyrocketing because high-end homeowners have the financial means and the flexibility to move during this pandemic,” Fairweather said. “The growing supply of luxury homes for sale means that wealthy buyers have more options to choose from and a better chance of finding a home that checks all of their boxes. Meanwhile, buyers who are in search of more affordable homes are grappling with fewer choices and fierce competition.”