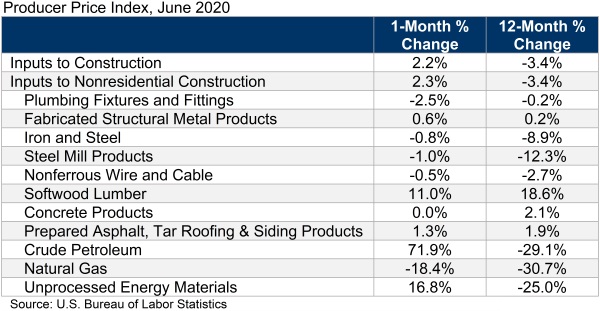 Among the 11 subcategories, six experienced monthly increases. The increase in prices was driven primarily by energy, with the largest increase coming from crude petroleum, which rose 71.9%. Unprocessed energy materials rose 16.8%, while the price of natural gas fell 18.4%. Softwood lumber experienced an 11.0% increase in June.

“For many contractors, lack of demand for their services has emerged as the leading source of concern due to the COVID-19 pandemic, followed closely behind by a fear of inflation and a potential increase in materials prices,” said ABC Chief Economist Anirban Basu. “June’s PPI data indicate that they are right to be concerned.”

“With global supply chains buckling and trade tensions elevated, materials prices are more likely to ratchet higher, even in the context of a global economy that will shrink markedly this year,” said Basu. “While the recent rise in energy prices receives much of the attention, the price of softwood lumber is up nearly 19% over the past 12 months and was up 11% in June itself.

“Inflation is not problematic at the moment, but that could change over the next year or two,” said Basu. “Central banks around the world have been increasing money supply, which could ultimately trigger faster price increases as economic activity firms. The combination of weak demand for construction services and rising input prices would be potentially devasting for nonresidential contractor profit margins, which remain an area of concern according to ABC’s most recent Construction Confidence Index. It would also be bad for the broader economy, which has benefited from the nonresidential construction sector’s relative stability in recent months.”