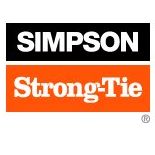 Habitat Strong is based on a pilot program funded by Travelers to build disaster-resilient homes using criteria established by the Insurance Institute for Business & Home Safety. The funding will be used to build Habitat for Humanity homes in 16 weather-sensitive areas in 2016.

“We are grateful for organizations like Simpson Strong-Tie and Travelers that bring their expertise to the table to help create fortified buildings in areas prone to natural disasters,” said Larry Gluth, senior vice president of U.S. and Canada for Habitat for Humanity International. “It’s because of this that we are able to work together to build strength and stability through housing.”

“We are very proud to be a part of the new Habitat Strong program aimed at incorporating building practices that improve homes’ resiliency to natural disasters. Building a home with a continuous load path ensures it is tied together from the roof to the foundation with metal connectors, which makes the home better able to withstand earthquake forces or high winds from tornados and hurricanes,” said Simpson Strong-Tie president and CEO Karen Colonias.

Simpson Strong-Tie has supported Habitat for Humanity for over two decades and has been a national sponsor since 2007, donating more than $2.5 million in cash and products, including the structural framing hardware (connectors and fasteners) and reinforced shear walls used in new home construction. The company will also support Habitat for Humanity’s annual Jimmy & Rosalynn Carter Work Project in 2016.