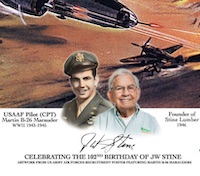 Sulfur, La. — As Stine Home + Yard celebrates the 102nd birthday of its founder, the company is distributing commemorative posters free at its stores.

J.W. Stine entered in the building industry with a childhood friend in 1946 after the two had returned from W.W. II as decorated fighter pilots. Starting out as homebuilders, J.W. later went his own way and opened a retail lumber business.

To this day, J.W. Stine has an office in the company’s Sulfur headquarters building, said his grandson and Stine Home + Yard Marketing Director, Jeremy Stine.

“He’s doing well physically,” Jeremy Stine said of J.W. “He still gets up and walks around his house by himself. Five of his boys still take turns spending the night with him every night and have been doing so for the past 10 years ever since his wife passed away. J.W. still smokes his pipe daily and has a little scotch every now and then.”

When the family revealed the posters to J.W., Jeremy said that J.W. “pointed to the B-26 bomber and said ‘that’s a nice looking plane!’ Then his eyes scrolled to the bottom, pointed to himself and said ‘and that’s a good looking feller!'”

Stine Home + Yard, an LBM Journal 2018 Entrepreneur of the Year company, is giving out approximately 2,000 posters among the company’s 11 locations, though Jeremy Stine says, “we may have to do another print run as there has been a lot of excitement and enthusiasm with this poster!”

Jeremy said the annual celebration of his grandfather’s birthday has turned into a time of reflection for the family that now includes seven children, 32 grandchildren, more than 70 great-grandchildren, and 800 associates at the stores.

“Our vision for our company starts with the words ‘Led by Faith and Family’ and two of our eight core values are Faith and Family. This is due to J.W. and his wife Dee Dee. His strong faith in God helped anchor his value system to treat his associates, customers, and community with a servant leader attitude,” Jeremy said. “His humility earned the customer’s respect, and his gratitude their loyalty. The unity of family led by faith were foundational to our company and we have J.W. to thank for that.”

Another of J.W.’s grandchildren, Jason Stine, works as a producer at Fox News on the show Fox & Friends, which offered this salute to J.W. on the occasion of his birthday.