Click here to continue to the latest LBM news.
This advertisement will close in seconds...
LBM Journal Strategies for Lumber & Building Material Pros
Home From the Publisher The Roaring Twenties, v.2 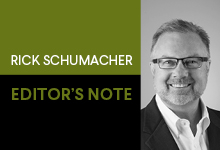 The decade of the 1920s is stuff of legend, marked by flappers, jazz music, and Prohibition, all on a backdrop of economic prosperity. One hundred years later, the cultural landscape may have changed, but our economy is alive and well. Though economists warn of an impending recession—because that’s what economists do— homebuilders are not thinking recession at all. Indeed, NAHB recently reported that builder confidence in the single-family home market jumped to 76 in December, the highest it’s been in 20 years.

With unemployment at historic lows, the stock market at record highs, and much of our economy hitting on all cylinders, there’s no question that this new decade is off to a roaring start. Only time will tell how it will play out. For now, smart companies are doing what they can to make the most of the strong market, while making sure they’ll be well-positioned when the market slows.

Speaking of smart companies, we’re excited to announce the winners of our LBM Dealer of the Year awards. Since innovation and top performance aren’t limited to large companies, our awards have traditionally recognized dealers in three revenue categories (less than $10 million, $10 million to $50 million, and $50 million-plus). For 2020, in response to the growing number of companies whose sales top $50 million, we’ve added a new category: $100 million-plus. In this issue, we’re proud to profile Kuiken Brothers, our Dealer of the Year in the $100-million plus category. The other winners, and the issue they’ll be profiled, include:

We had a record number of entries this year, so a big congratulations to all of the LBM Journal Dealer of the Year winners.

Long-time readers will know Bob Heidenreich from his column on “Selling the Deck Project.” As it happens, Bob was an early adopter in e-commerce. In fact, his online sales have grown to the point where they now exceed sales from his brick-and-mortar store. Since we’re hearing from more and more readers who are interested in learning more about selling online, and since Bob has built his e-commerce business from the ground up, he’s agreed to share his real-world insights and experiences in a new column, E-Commerce 101.

Here’s to working together throughout the Roaring Twenties, v.2, to build your sales, your business and your brand.